Epirus: the best-kept secret in Greece?


This little-known region of the Greek mainland has the world’s deepest gorge, a landscape like Scotland’s and mountain villages to rival those of Provence, says Caroline Shearing

Epirus: the best kept secret of the Greeks
The pretty seaside resort of Parga is home to pastel-coloured houses and a Venetian castle Photo: ALAMY

With increasingly shaky steps I edged closer to the cliff-face as the path ahead narrowed to a ledge and the first glimpse of the chasm I had travelled across Europe to see revealed itself through the pine trees. The path widened to accommodate a natural viewing platform and, placing a steadying hand on the stone wall forming a crescent around its perimeter, I peered over the edge into the toe-tingling depths of the Vikos Gorge and what is, according to the Guinness Book of Records, the world’s deepest canyon.

The giddying drop ran sheer for more than 1,000ft – a depth easily capable of accommodating the full height of The Shard in London and then some – to a dry riverbed draped like a rocky ribbon across a valley floor carpeted in pine trees.

Canyon purists question the claim that this is the world’s deepest: Guinness’s calculations are based on width-to-depth ratio (Vikos is almost 3,000ft at its deepest and a mere 10ft at its narrowest). But from my lofty perch high above the gorge there was no denying the natural beauty of this deeply humbling spot.
Travelling in late August to Epirus, a mountainous region in the far north-western corner of mainland Greece on the border with Albania, I had expected to find myself jostling for space at the gorge with other nature-loving souls. Instead, there to greet us in the near-empty car park at Oxia – a lookout point high in the Pindus Mountains, a short walk from the gorge – was a lone donkey keeping a watchful eye over a stall laden with jars of honey. The first 10 minutes at the gorge were then spent in the company of my snap-happy husband with no other sign of human life in sight. The blissful illusion of being alone in the world was broken only by the arrival of a sure-footed German couple on a walking tour of the gorge. 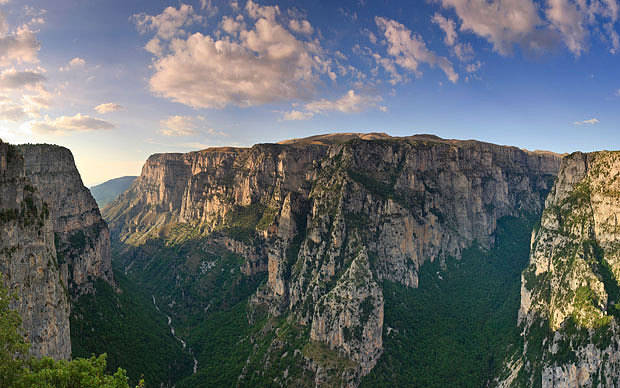 The Vikos gorge is, according to the Guinness Book of Records, the world's deepest.


The height of the summer holiday season and yet my travels through the Epirus region had seen me encounter surprisingly few tourists, other than a smattering of Germans, Italians and holidaying Greeks. Almost 50 years after British holidaymakers started flocking to Greece in search of sun and sea, Epirus remains the preserve of the Greeks largely thanks to its relative inaccessibility, poor infrastructure – though that changed in 2009 with the opening of the EU-subsidised Egnatia Odos [A2] motorway – and a wild and dramatic coastline with few sandy strips of note.

• Is Skopelos the perfect Greek island?

Epirus, the most mountainous region in Greece, is instead blessed with a lush and soaring landscape reminiscent of Scotland at its finest, mountain villages to rival (whisper it) the best of Provence, and that gloriously unspoilt Ionian Sea coastline. Add to this a densely forested landscape (home to brown bears, wolves and jackals), lonely clifftop monasteries, soul-stirring mountain vistas, low-key seaside resorts and skies patrolled by birds of prey including golden eagles, and it’s easy to see why the Greeks have been keeping Epirus a secret from the world for so long.
Below is a step-by-step guide of how to make the most of this beautiful corner of Greece.
The interior
The Pindus Mountains
Located within the Zagori region of Epirus, this range is home to two national parks, rugged peaks, rare flora and fauna, and 48 charmingly rustic but surprisingly grand villages. I’d recommend staying couple of days in the area before or after time spent at the coast.
Spiritual awakening
Epirus is dotted with monasteries but among the smallest and most atmospheric is Saint Paraskevi, a stone-walled chapel dating from the 15th century. Paraskevi, located high above the Vikos gorge near the village of Monodendri, is worth a detour for its original frescoes and stupendous views. Admission: free. Park in Monodendri for the 10-minute walk to Paraskevi (signposted from the village). Arrive before 10.30am to avoid the minibus tours.

• The best books about Greece

Humps ahead
Until as recently as the Fifties the stone-arched bridges that criss-cross the Zagori region played a vital role in linking communities. Today, many of these bridges, which date from the 18th and 19th centuries, can be seen from the modern roadside. The main road to Kipi, just after the turning for Dhilofo, offers a chance to get up close to some of the oldest and most impressive. Of note are Kokkori bridge, dating from 1750, which is backed by a pinnacle stack and spans a high arch above the Voidomatis river; and Plakida with its three deceptively steep but elegant arches. 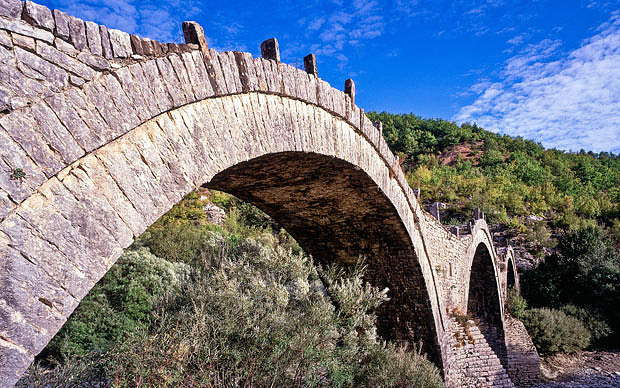 The stone bridge at Plakida has three elegant arches.

Farther north, the Konitsa Bridge, spanning the Aoos river near the village of Konitsa, has the highest span of any bridge in the region and is hung with a bell to warn of the danger of crossing in high winds. Admission: free. There is roadside parking at Kokkori and a sign indicating the location of six other nearby bridges of note.
Move over Provence
The 48 villages of Zagori are home to stone-built mansions topped off with smart slate roofs, built by wealthy merchants in the 18th and 19th centuries. Among the loveliest is Dhilofo, located at the foot of two hills, with its cobbled narrow streets, delightfully sleepy atmosphere and glorious views from its church. Dhilofo also makes a great spot for lunch: Sopotseli Taverna (0030 2653 022629), in the village square, has hand-written menus offering deliciously simple and traditional dishes; mains €6 (£4.30), starters €4 (£2.75). Touristy Monodendri and Papingo (the latter a magnet for its natural bathing pools) are marginally livelier but it’s low-key Dhilofo that ranks among the most attractive.
• Greece summer holidays guide
Take the high road
In a region of superlative landscapes navigated by switchback bends and cliff-hugging passes, where you’re more likely to encounter a herd of goats than a passing car, it is almost impossible to single out a best driving route. Worth a mention, though, is the winding road up to and from Oxia, for the Vikos gorge, through a “stone forest” of stratified rock. On the drive down you are rewarded with views of a mountainous landscape blanketed in forest as far as the eye can see.
A walk on the wild side
For those opting for stays of more than a couple of days, there are a number of options for exploring the Zagori region on foot, ranging from woodland walks and day-long hikes to an ascent of Gamila for a sighting of Dragon Lake. To buy walking maps of the region, see: anavasi.gr.
The coast
An early morning dip
Greek mythology has it that the Acheron river is where the souls of the newly dead were transported into Hades. Today, the river makes an exhilarating wild swimming spot. Head to Glyki and follow the signs for Acheron. It’s a 10-minute walk to the river, followed by 15 minutes of wading before taking the plunge and swimming in its chilly waters. Arrive before 10am to explore its cooling depths in peace. Admission and parking: free. Shoes with a good grip are recommended for wading. There are no facilities to store belongings.
Beside the seaside
The pretty resort of Parga is worth a look for its vibrant seafront lined with pastel-coloured houses, Venetian hilltop castle and bustling bars and restaurants. Parga is a touristy spot but this does not detract from its charming natural setting, the focal point of which is the tiny island of Panagia, located just offshore, and its terracotta-topped church. Parking is limited and charges (€5) may apply. 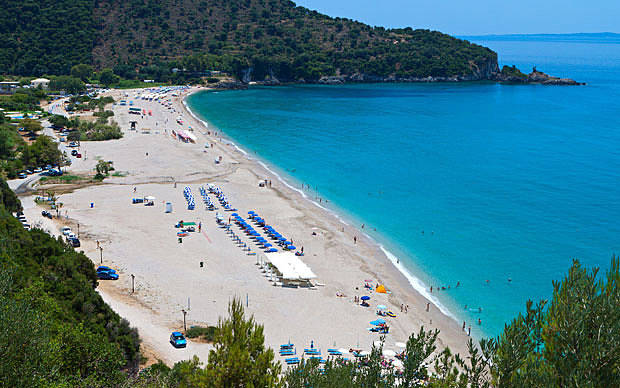 Beach life
Pack a picnic and head north along the coast road to the wide sandy beach at Karavostasi. Flanked by pine-studded headlands, its proximity to a nature reserve makes this a largely unspoilt spot and even in high summer there is plenty of space on which to spread a towel. Climb the steps at the southern end of the beach to visit the remains of the 4th-century town of Dymokastro, with its fabulous views out to Corfu and Paxos. Free parking.
Messing about in boats
Hire a boat in the low-key seaside resort of Sivota to visit the verdant string of islets that lie just offshore. This mini archipelago is home to a number of beaches, the most popular of which is Piscina for its crystalline waters, and hidden coves in which to drop anchor. From £50 per day. Book through Isabella Tours (0030 26650 93317; isabellatours.com) .
Picture perfect
Pootle back along the coast road in the direction of Parga about an hour before sunset for a number of excellent roadside vantage points from which to stop and photograph nearby Corfu as the setting sun turns the southern end of the island a fiery red. Or head straight for the mountain village of Perdika, which also offers spectacular sunset views, along with atmospheric bars, a good choice or restaurants and a glimpse at an authentic slice of Greek life.
Where to stay
If you’re looking for a coastal property, White Orchid offers fabulous sea views, cool interiors and warm service on the outskirts of Sivota. Inland, Zagori Suites has seven charming rooms in Vitsa, near Monodendri, while Monopatia Mountain Resort offers nine stylish rooms and five cottages in Ano Pedina. All are available exclusively through Simpson Travel (020 8003 6557; simpsontravel.com). Two weeks’ b&b costs from £1,801 per person, based on two people sharing, including flights, transfers and car hire. Shorter breaks are available.
Getting there
Simpson Travel (above) operates a direct weekly flight to Corfu, followed by a two-hour ferry crossing to the mainland port of Igoumenitsa.